The efficiency Of Heat Engine 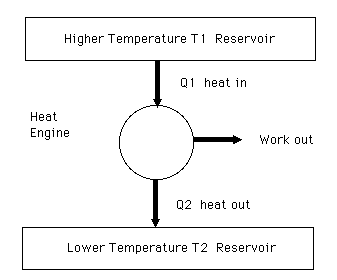 Thermodynamics is a branch of physics that entirely brought concepts and changes in physics that entirely revolutionized the field. A heat engine is a contribution of thermodynamics which is a system that converts the heat energy into mechanical work.  A heat engine extracts heat from a reservoir and does work like lifting weight, moving a piston, and finally discharging some of the heat energy into the sink.

Below figure clearly explains the simple working procedure of the heat engine.

Heat engines work between 2 heat reservoirs T1 and T2 respectively. Heat dissipated from T1 and T2 and converted into work.

The efficiency of the heat engine is determined by

Q1 is the heat flow from source to the engine

Q2 is the heat rejected from the engine to sink

W is the work done

Q1 is the heat absorbed from the source.

Note: The internal energy of the system is not affected since the engine returns to its original state after the completion of each cycle.

The efficiency is given by

Another important concept of Physics that completely brought change in the industry is the invention of highly efficient, less heat consuming device the Light Emitting Diode (LED). LED is one of the popular advanced technology that has conquered the world. Now let us move forward to know What is LED?

LED is a semiconductor light source that has the capacity to operate with a low voltage and power and hence is considered as an excellent way of energy saving. Most prominent public places, streets, and even homes in recent days give preference to the LED lights over normal light bulbs. In order to save energy and for a go-green way of living many state governments have come forward to replace the old fashioned bulbs, CFLs to LED. The major noticeable changes were the replacement of incandescent bulbs in the seven-segment display to LED.

LEDs are the most common electronic components used as indicators in circuits. They are also used for luminance and optoelectronic applications. Organic LEDs are the advanced version of LED that emits light in response to an electric current and features the emissive electroluminescent layer film built using the organic compound.